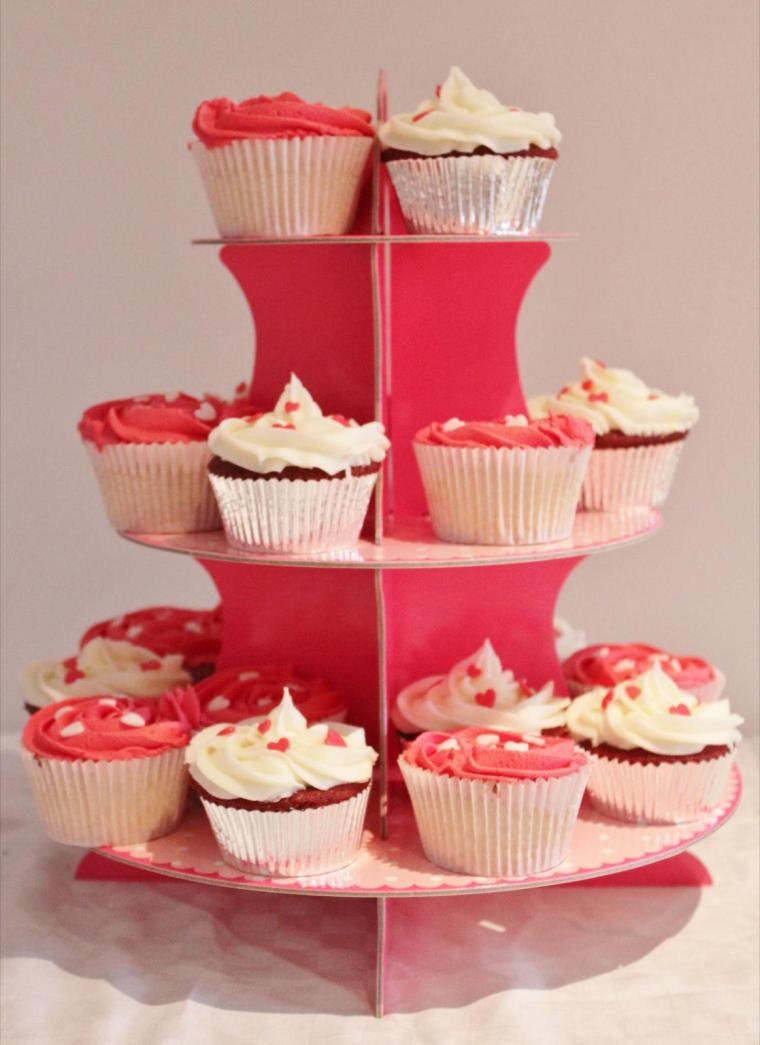 I had the pleasure, a short while ago, to be asked to make the cup cakes for my recently engaged friends, Bryony and Owen for their engagement party. It was an honour to be asked and I was given free rein to come up with a design and flavour. I had been told that the theme for the party was going to be red – so the first thing that popped into my head would be to do some red velvet cupcakes – always delicious and moist and people are continually amazed at the colour.

I decided to do half vanilla and half red velvet for a bit of variation and had white cream cheese icing on the red velvet and red butter icing on the vanilla creating a really effective two tone scheme. I didn’t think left like this it quite fitted the theme of an engagement party so added some hearts and it finished it off perfectly. I bought the PME plunger heart cutters in 3 different sizes and using red and white sugar paste cut several different sized hearts and added them as the finishing touch. I rolled the sugar paste to be about 2mm thick – so pretty thin and it is tricky to make sure it doesn’t stick to the board. I recommend investing in a non-stick board and rolling pin as it makes this type of work infinitely easier and is a great surface for drying after they have all been cut out.

It is amazing the number of hearts that were needed for just 24 cakes and are time consuming to make, but if you spread it out over several evenings – and whilst watching some tv gets done very quickly. It is worth remembering to make sure there is enough time for the hearts (or whatever shape you are doing) to set hard before you use them though or the effect won’t be quite so good. Having some tweezers or small hands handy is also pretty useful when dealing with such small little hearts too!

If for any reason you have some spare sugar paste creations left over after your cake is finished the best method of keeping them is in a container such as an egg box or small card box as this allows them to breathe and stops them sweating which might happen if you use an air tight container.

I was very pleased with the finished product and packed them away in sturdy white card tray and delivered them to the happy couple who were very pleased! The cakes went down very well with the guests at the party – even with the stiff competition of a tower of krispy kreme doughnuts next to them!

The next challenge will be deciding what to do for the wedding cake!